Domestic VCR
The simplest low-cost solution is to use a domestic VCR. These will typically give 8 hours recording time and can be used in conjunction with Video Remote Control module to provide event-only recording.

Advantages - very low cost. Worth considering purchase of a dedicated VCR for camera recording. The dedicated VCR can be hidden in the attic or a cupboard making it less likely to stolen by an intruder.
Disadvantages - most domestic recorders have a slow "take-up" time. (the time taken to start recording)
- cannot use the VCR to record TV channel whilst camera input is selected.


Time-lapse VCR
Similar to a domestic VCR but with a slower-moving tape that records the camera pictures as snapshots at split second intervals. The time-lapse can be set to give 24, 240 or 960 hours of recording on standard VCR tapes.
Advantages - very long recording time, cost-effective. Added features like alarms, auto tape-rewind.
Disadvantages - the longer the recording time the longer the period of time between the snapshots. 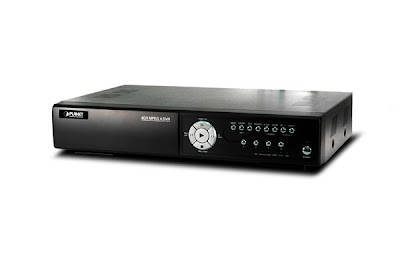 DVR
A digital video recorder will take analogue images from a cctv camera, digitise them and store them electronically. The most common media for storage is a hard disk drive as used in most personal computers.

Most DVRs now come combined with multiplexer and motion detect functions and are generally considered the future of cctv recording.
DVRs can generally be split into two groups - standalone black box and PC-based solutions. PC-based solutions are discussed in their own section.

Advantages
All-in-one box for recording, multiplexing, alarms and motion detection, making the installation of a cctv system much simpler.
Higher resolution than S-VHS VCR is possible
Near instant access to recording from known time and date
No loss of quality when copies taken
Large storage capacity eliminates the need to frequently change tapes
Can record events in real-time before an alarm actually occurs with "Pre-event trigger"
Enhanced playback function, forward and reverse frame by frame playback
Easy to connect to networks/internet for remote viewing and playback.

Disadvantages
At first glance the cost seems high but taking into consideration the cost of separate units of recorder, multiplexer, alarms and motion detect the all-in-one box now proves to be a viable solution.
Posted by Louis Ong at 1:14 AM